Thank you very to much to all my Social Media Colleagues, Connections, Followers for replying to the question | What kind of boss would you like to work for?. Herewith below some of the responses I received

I like a strict boss, I feel a strict boss keeps you on your toes. Astrict boss to me is someone who ensures that the work gets done. Sometimes they use methods that might seem harsh but it’s the work hard now and relax later.

Someone who allows me to explore my #creativity in completing my daily tasks. One who understands that #productivity is met when employees feel comfortable in the workplace. A #leader who’s always seeking innovative ways of doing business. #JobAdviceSA

Little emphasis is placed on vetting a new boss when seeking a new role. Having a mismatch in expectations can be a major set back in your career! Find someone that sharpens your skills! It is a great gift to have a mentor that happens to be your boss. #JobAdviceSA @JobAdviceSA

One that allows me: *freedom to work independently when necessary *has empathy and compassion *is transparent *encourages and promotes personal growth *is a leader *maintains professionalism *has a sense of humour *understands and knows diversity

I would like to work for a boss who actually cares about what they do. Who is interested in creating value and growth and importantly the brand of the entity should matter, such a boss potentially might not see employees as dispensable but valuable, quality matters to such a boss. I know if all of these things matter to my boss, I will be happy as to grow the company they have to further develop and take care of their employees. A well taken care of skilled employee is great ammunition to have in your arsenal. At least I would like to believe so.

The kind of boss that looks after their employees, the kind that puts effort and training in to each individual, the kind that creates a positive and effective culture in the work place.

A boss who would not have a problem in you persuing your studies.

Maylene Kim May – via LinkedIn 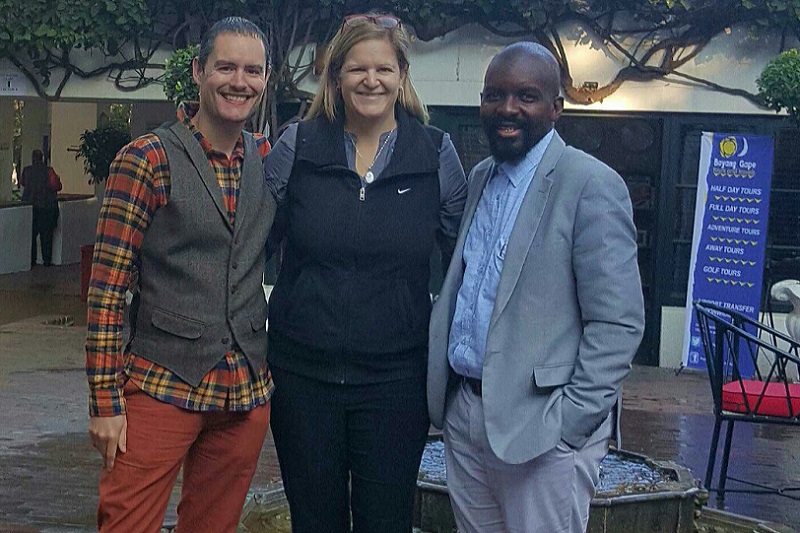 In a country where finding work is a daily struggle for many, a Twitter hashtag is doing its bit in helping jobseekers get their foot in the door of the South African labour market.

Job Advice SA is the product of Tim Barry, Vanessa Raath and Wesley Madziva who came together and created the online network that connects job seekers and recruiters in South Africa.

The trio “met” while Barry was still living and working in the United Kingdom while following a recruitment conference that was happening in Johannesburg on Twitter.

“We began following and chatting with each other on Twitter and other social media networks,” recalls Barry who later immigrated to South Africa in late 2012.

Residing in Cape Town but still keeping contact with Raath and Madziva who are based in Gauteng, Barry followed another event on Twitter where South African expat recruitment industry entrepreneur Greg Savage spoke. Barry retweeted and replied to insights from Raath and Madziva who were attending the event.

Among the tips given by Savage to the audience of recruitment professionals who were attending the event, was that they should take part in Twitter chats so as to grow their social media networks and position themselves as experts within their industry.

This gave Barry, Raath and Madziva the idea to start a Twitter chat for South African recruiters and jobseekers.

The first chat took place in June 2014 with half a dozen recruiters and jobseekers participating in the chat. While the first chat only had a few participants, it generated a lot of tweets.

“When we started the weekly Twitter chat, we had no idea that it would grow into a huge social media community of thousands of South African jobseekers as our initial aim was merely to connect the few jobseekers who took part in the chat with recruiters who may be able to help them find jobs,” says Barry.

South Africa’s unemployment rate has hovered around the 25% level since 2010 with the youth largely bearing the brunt of unemployment. Government has responded to the issue in several ways including the signing of the Youth Employment Accord in April 2013.

The accord sets out a joint commitment by government and social partners to prioritise youth employment and skills development. Also in efforts to respond to youth unemployment, government in September 2016 announced a youth employment programme that will aim to place one million youth in paid internships in the private sector over a three-year period.

The cost of the internships will be borne by the private sector and supported by a negotiated package of government incentives. President Jacob Zuma said consultative processes among relevant stakeholders in government, labour, business and civil society will start, with further details still to be announced.

In line with government’s call to work together to move the country forward, Job Advice SA is playing a role in helping the country’s youth to find work.

“There is a void in terms of youth education on how to search and apply for jobs and what information should be included on a CV. This in addition to researching companies prior to going to an interview as well as interview etiquette etc.,” said Barry.

“I feel that Job Advice SA is giving young South Africans especially a platform where they can find this information and ask questions on any areas that they are struggling with,” explains Barry.

The #JobAdviceSA hashtag can be seen trending on many a Monday afternoon when the community of jobseekers and recruiters spend an hour discussing many a topic such as dealing professionally with recruiters on social networks.

The team also poses questions at 15 minute intervals while also answering questions posed during the discussions.

Questions like: “Is there someone here that will take a look at my CV just to see if it’s right? I’m unemployed so I can’t offer money” as well as “Is it okay to add certificates I received at the valedictory on my CV?” are posed during the Twitter chat.

In the ever changing world of technology, the recruitment process is also changing with modern recruiters no longer relying on posting job adverts on their website’s careers or vacancies page or on job websites.

Barry who in the past has used #HireTim on social networks to find employment, is of the view that more and more South Africans are getting used to the idea of not only searching for jobs on job websites but also signing up for professional social networks like LinkedIn. South Africans looking for work are also joining Facebook groups for jobseekers in addition to following recruitment companies on Twitter.

Barry who is a freelance consultant for employers, recruitment companies and software start-ups has urged those looking for work to never give up.

“Don’t give up! You might not be successful after your first application, after your first interview or even after you have actually been offered a job but keep going and you will find work eventually,” said Barry.

South Africa along with other countries around the world commemorated Workers Day on 1 May.

“It is quite ironic that the world celebrates Worker’s Day when there are so many people unemployed in all countries internationally. Like many other countries’ people, especially the youth who are unemployed, struggle to find work due to the poor quality of basic education or employer’s requiring that candidates have skills or experience that the majority in the job market simply are not able to acquire,” observed Barry.

The fact that the hashtag is seen trending on Twitter on many occasions has made the team immensely proud.

“It makes us feel immensely proud when #JobAdviceSA is one of the trending topics on Twitter as that means that we are making a real difference to South African jobseekers by discussing the job search and employment topics that they are most interested in,” explained Barry.

The trio, who make no profit from running #JobAdviceSA, is now considering holding live Q and A sessions on Facebook as well as recording podcasts among others to grow its community.

With them only having met in “real life” for the first time only last year, the future is certainly bright and many South Africans seeking employment advice can only benefit from this partnership.-SAnews.gov.za